Based on a German video I published on YouTube – differences to the original are minor. Now it's English though!
These will appear a lot less frequently from now on. The DnD-Rant and this rant have already been on the internet, I just translated them (adding a bit of stuff here and there) – now I am out of pre-produced stuff.

Warning: I hate Shadowrun 5th Edition (5E). If you are a fan of Shadowrun 5E's rules: Call DocWagon, they'll need to revive you at the end of this rant.

My experience with Shadowrun:

First of all: Shadowrun's Setting is AWESOME! Cyberpunk is awesome! I discovered the cyberpunk-genre through Shadowrun, and boy, Cyberpunk rocks!.

I first learned about Shadowrun via Harebrained Schemes' Shadowrun games. They were great! Out of the three of them I liked Shadowrun: Dragonfall the most. (Probably because it is set in Berlin and I am German, don't tell anyone)

Back when I learned about Shadowrun (the video-games and the Tabletop-RPG-System) DnD5E was the only system I knew properly. Watching a Shadowrun-Session being played by others was a very interesting experience: Obviously it is a completely different world, High-Fantasy versus Cyberpunk … Yeah. But the structure of play was completely different, too! The GM gives the players a task, but no clear solution. The players have to figure out how to solve the problem themselves.
If you only played DnD before, guiding your players through linear dungeons, this is an amazing experience!

Oh, and the source rule-book is amazingly cheap in Germany: It is only 20€, including everything you need to play. Neat! Looking at you Wizards of the Coast charging 50$ per book – and you "need" three of them – 150$ vs 20€ …

Now we have talked about Shadowrun's good things. Prepare: THE SALT!

One of the most popular sentences regarding Shadowrun is probably:

I love the setting, but then … there are the rules.

I wholeheartedly support this statement. The rules of Shadowrun 5E are complete garbage in my opinion (I don't know how the earlier versions were – Catalyst are apparently experts in messing stuff up). I am talking about the German version by Pegasus Press by the way. The English version supposedly is way worse written.

The rules are very difficult!

Alternatively I could have used someone else's summary from the internet. Why do you need to summarize the rules yourself?!
It's practically impossible to know every rule from all the books. If you do know all of them they would probably contradict in several places.
But not everything is heavy rules: Some of it is under-defined, and totally useless, too: The Rigger-Chapter asks more questions than it answers.

Explaining the rules to someone who never played/read Shadowrun 5E before is torture, and takes loads of time.
When explaining a new system to someone there are usually two choices:

For my oneshots option 1 was obviously out, so I decided to do option 2. I explained the rules 2 times in person:

I gave up afterwards, and over the course of a week created an rough explanation video which is, again, 2 hours long (and sadly it is in German, so probably useless to most of you :-( ).

My first character wasn't good at anything. You do not know what to expect. I am pretty certain not just my first character was incompetent, but most first characters (unless you use a guide for creating you character … I wonder where these come from).
Even Catalyst messed up character creation: Some of the archetypes are broken. Most prominent example: Throwing grenades:

The official character sheet is a joke. Not using Chummer should be considered masochism. Chummer is not made by Catalyst. Obviously.

The whole concept of gear-porn totally annoys me. It makes character creation very time-consuming.
Gear-porn means: There are 20 pages of a shopping-catalog near the end of the book, which include at least 4 variants of each pistol/gun/whatever which are all nearly the same, except some very minor differences – In the end only one, or two of them are useful, and the others are garbage, because they are either too cheap (why take the cheap one, when there are better ones?), not cheap enough (why take the medium-priced one, when you want a throw-away-gun?), or not viable due to some other reason.

Earlier I said Shadowrun 5E is priced very well. That is just the core source book. As a player you better buy the other 31 splat-books, too, so you can create the ultimate Blood-Magic-Cyber-Adept-Decker-Ninja.
As a GM you better buy them, too, so your players don't just say: "Yeah, this overpowered thing is featured in this weird splat-book you never heard of before".
As a different player you should also buy them, unless you want to be an unimportant, incompetent side-character in the game.
OR, if you don't want to buy the splat-books and ban them, the GM better starts figuring out how much basic stuff costs, and get sass from their players. Want some bolt-cutters? Well, the price is listed in source-book X, but since we're not using that …

There are 4 different worlds

The players can not help each other from one world to the other. If you are waiting for a Decker to hack into a host: Make some food, go for a jog, and watch a movie. You have loads of time you would otherwise be twiddling your thumbs in.

Reddit says one of the most important houserules for Shadowrun is: "Don't break the game." WTF?!
(The other important one: You're allowed to recreate your character after session one, in case you missed something, because character creation is STUPIDLY DIFFICULT!)

Some rules are outright stupid or unrealistic. Like damage from having a car-crash, times until grenades explode, or alchemy. Everyone likes alchemy: You want magic? Well here's magic, ONLY WORSE!
Or the drug-system you can game, so you can take drugs but never-ever get addicted.

Many qualities are fiction-only. In a system obviously built for munchkins, so it is generally accepted that they are ignored. You want free karma? Just take some random allergy that never comes up!

You want to break a Mag-Lock? Lucky you, I have a flowchart for you. 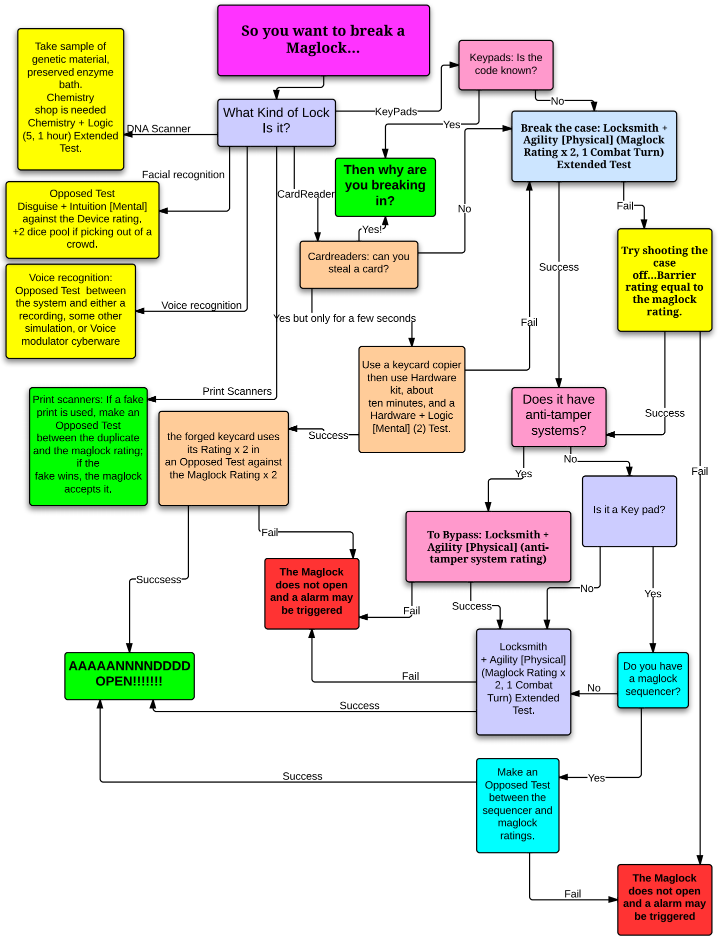 source
NO! You're not just rolling dice, and the lock is opened, or stays closed, you have to use a flowchart (which isn't included in the rules, obviously)

If I were to read the book again I could continue this list even further.

In my experience the characters also feel very overpowered. Fighting in Shadowrun should be one of these two:

This is supported by there not being any balancing system like DnD's challenge rating, or other mechanic that makes it possible to make fights more easy or hard for your players while in the fight. This is not bad, but it says something about the game.
Since the setting is a Cyberpunk dystopian future, where Mega-Corporations already won, your goal is to make the best of it. If your character dies there will be another one, and they will do your job better than you. So Shadowrun 5E should support death as a dramatic thing to be had here and there, right? Definitely not!
If death were a thing to happen more often, character creation would be way quicker, but it takes forever, even if you do know how to create a character, because of the whole gear-porn thing! Thus option 1; poor mall-cops; is the common occurence.

Shadowrun 5E is what annoys me about DnD5E; just in Cyberpunk instead of High-Fantasy. And ten times worse.
The system used for everything, but only suitable for a very narrow range of players: Cyber-Munchkins who like to find loopholes in 480 pages of rules.
Some of my DnD5E annoyance is about no one reading the book, if you're pitching the game to a group who did not knew the system before. If your players don't like reading up to 100 pages to understand DnD: They will never read Shadowrun 5E's rules.
No one of the 13 people I played one-shots with, who were new to the system read the rules after playing.

This is sad, because there are some cool mechanics in Shadowrun 5E

If you want to GM a Cyberpunk setting use something else

Now I understand why Shadowrun's computer games are awesome though: Shadowrun 5E is a system for a computer to run for you. Any sane person would eventually go insane with all these rules.

Don't forget: If you're having fun with Shadowrun's rules, there's no wrong way of having fun. Even though I can't understand how anyone has fun with them.

Post Note: Me telling you to play The Sprawl? Yeah … The Sprawl isn't that good actually. See my The Sprawl Review for that, too. 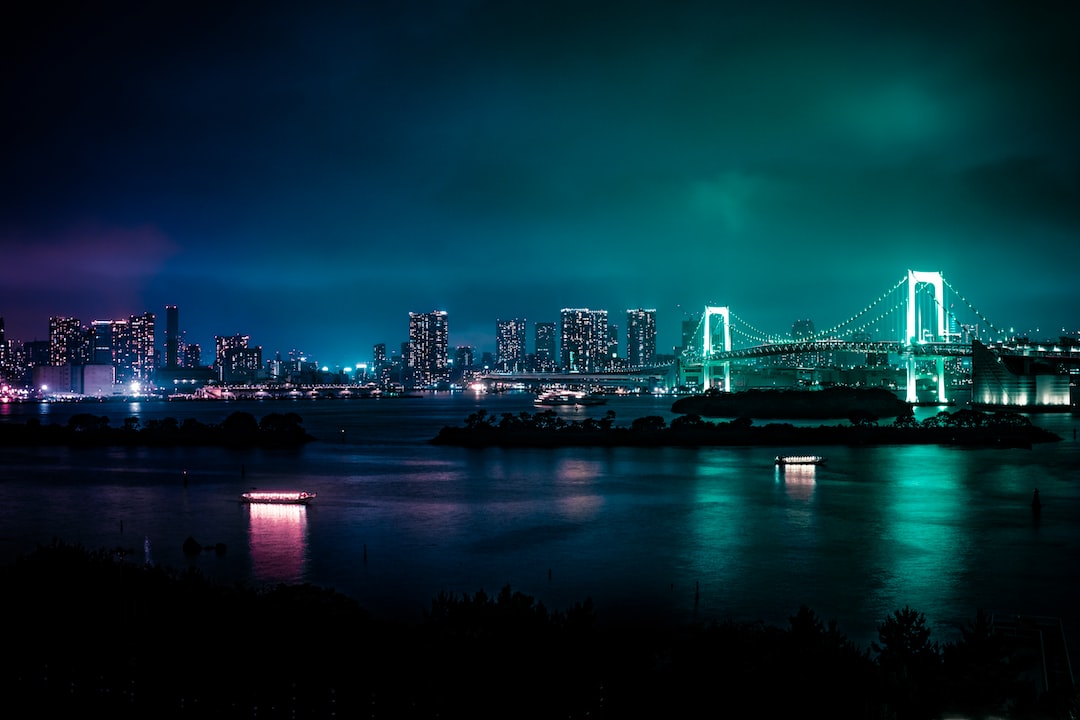 Yesterday I had my first (gameplay-)session of The Sprawl, as a Game-Master. Even though I feel very comfortable with Powered by the Apocalypse (PbtA) games, I am having a 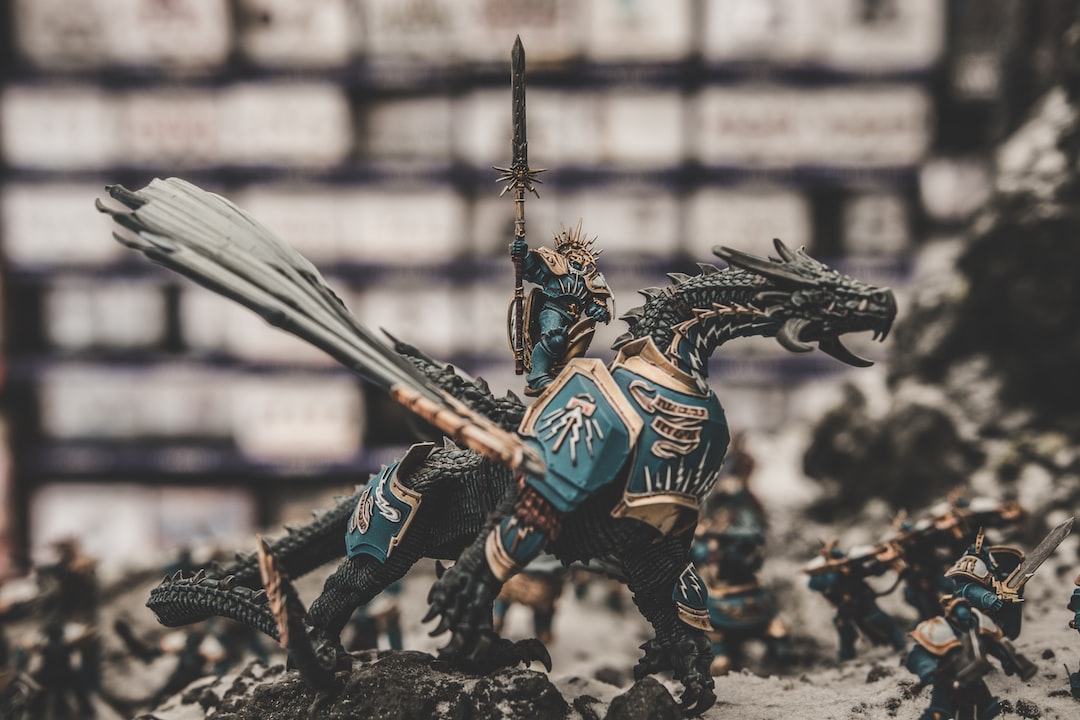